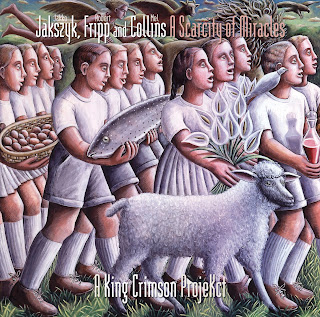 DGM/Inner Knot Records announce the upcoming release of A Scarcity of Miracles, a new release in the King Crimson ProjeKct series. The ProjeKct features Robert Fripp, Jakko Jakszyk and Mel Collins with a rhythm section of Tony Levin and Gavin Harrison.

A Scarcity of Miracles will be released on May 30, 2011. Information and merchandise for the release can be found at www.dgmlive.com.

When Fripp (King Crimson founder and guitarist) and Jakszyk (Level 42) got together in February 2009 neither expected that their initial sessions of guitar-only improvisations would result in a full-blown album, or that it would ultimately be deemed to be a King Crimson ProjeKct. As the material from those first sessions developed, it was obviously becoming much wider in scope and scale. The arrival of sax player and former King Crimson member, Collins, added further colour and texture to the emerging songs. The line-up was completed with the addition of bassist Levin and Porcupine Tree’s drummer, Harrison (both members of the 2008 incarnation of King Crimson), adding their parts to the material in their respective studios.

What had begun as an exchange of ideas grew into an album of heartfelt songs, an album that is immediately accessible on first hearing but reveals fresh detail and depth with each subsequent play, as one might expect from musicians of this calibre.

A Scarcity of Miracles (A King Crimson ProjeKct) features artwork by PJ Crook and will be released simultaneously as a CD/DVD-A package, a 200gm limited edition vinyl album with a gatefold sleeve and a standard CD. The CD/DVD-A pack features the album mixed in 5.1 surround sound, the album in high definition 24/96 stereo, an album’s worth of alternate mixes, improvisations from the original sessions and the video for the title track, along with the CD album in a slipcase.

Many fans have read about the evolution of this King Crimson ProjeKct through Fripp’s widely read online diary at www.dgmlive.com - where he has updated progress on the recording, mixing and mastering of the album at regular intervals.

“JFC [Jaksyk, Fripp, Collin] is a superb album. I have not heard stereo quite like this since the early 1970s, and much of that was not of this quality, “ writes Fripp in his December 15th entry to his online diary. “JFC is one of my favouritist albums, of those where I am a determining element. It has the Crimson gene, but is not quite KC [King Crimson].”